Rushing to the airport, clinging onto the various documents to be shown receipt for flight, mission order, permission letters from the government whilst the road uneven road. We have had our humanitarian flight bought forward and have to head to the tarmac straight away. Once we had rushed through immigration, and rushing through all checks we then were informed that there was a bit of a wait, allowing us to have some lunch.

My colleague and I (Stella) are in DRC Nord Kivu to deploy MSF OCA’s new health information system (HIS).  We had been visiting one of the cholera treatment centers MSF is supporting in communities around Goma to understand the data collection, the flow of data and if the new tool we were implementing would work with their current data collected. This is important to ensure that the new tools meets the medical team’s needs.

Following the flow of patients in the cholera center where patients are separated and treated according to their dehydration level, determined in the triage space. We were rushing to get back to base, through the community where there had been some unrest as people were setting up roadblocks and demanding money to be able to pass. On our way out police had come and things were calmer at least on the road.

Cholera is endemic in Goma with outbreaks peaks each year, the treatment centers are open continuously with smaller number of beds but increase ms capacity when the outbreak season comes. MSF has been providing medical care in DR Congo for over 40 years and from Goma the needs were not necessarily evident. It’s a bustling town with good infrastructure and lots of new building developments. But, as was explained during my security briefing and can be the case in many developing countries towns like this represents a minute fraction of what life for the average Congolese was like and visiting the project locations would be eye opening.

Which brings us to today, the first part of a two day journey to one of the projects we will be training in. Walikale is an hour plane ride and six hour drive away, a town nestled in the greenery typical of Congo. This was because the airstrip near the project was in need of repairs. The plane we were using is an ICRC plane which carried passengers and in the case of MSF as well as patients who could not be treated at the project location and brown boxes filled with medical supplies peppered with MSF tape filling up the rest of the aeroplane.

As we descended to Lubutu and its airstrip, a non tar marked strip of red soil appeared between the masses of palm trees and jungle. If there was no plane you would not know it was an air strip from the two wooden strictures to keep out of the sun representing the only infrastructure at the site. We stepped out to a crowd of people; a mixture of people who live nearby, patients and their carers and other MSF staff as well as ICRC staff who held the flight manifest and other details needed. Logistics moved quickly unloading and getting the flight ready for the next passengers. Within 30 minutes the flight was back in the runway blowing orange smoke and disappearing into the clouds. 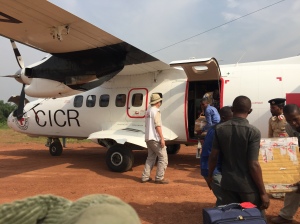 We drove through Lubutu’s main road peppered with clay houses along to the compound run by nuns, available as a base for all organisations to be able to spend the night before moving to the next stage of their journey. We settled in waiting for the electricity (and wifi) in the evening  which would give us three-four hours of light before being turned off. We settled into the basic but comfortable rooms, preparing for the six hour drive we had the next day, when we would be arriving in the project in Walikale.